Have you heard of I am like October when I am dead? Well if you haven't, kindly click on the link provided so you may read the cool works of one Steve Roggenbuck.
He writes short poems (well most of them are quite short) that aren't incredibly verbose in conceits and elaborate metaphors and images but instead are simple and very fun to read. I love them. They are shiny.
What's that? You don't like poems? Well I have one thing to say to you!
i dont care about reading a poem
who do you think i am, robert frost?

i have never been in the woods and i hate walking
- Steve Roggenbuck
Here is another one of his poems:
god help me im throwing my neighbor off a building
That's it. I find them amusing, which is why I'm helping with his distribution! He wants them to be distributed freely wherever, and I decided well I'll help. Now he can say that his poems can be found in physical form on the continent of Australia! As demonstrated by this photographic evidence I took at Murdoch University (where I am a student at): 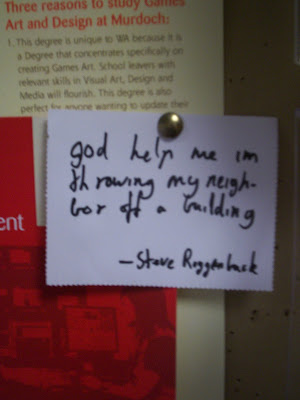 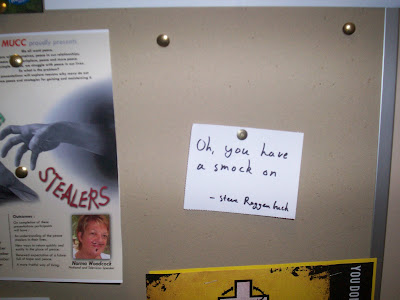 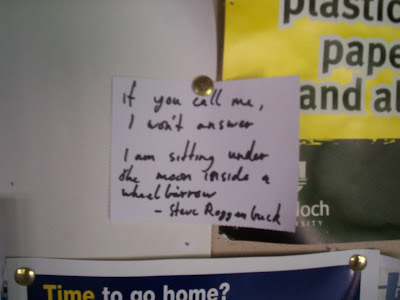 Bloody hell my handwriting is messy. 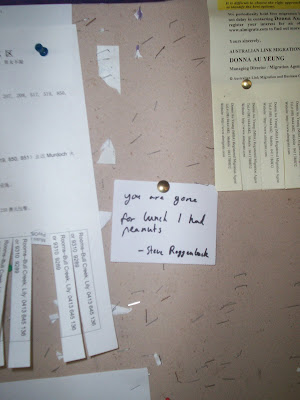 Well, I had two other little cards that I didn't get to hand out as I was afraid that people would see me. The poems I failed to put up were:
i have two sunflowers wilting on my bookshelf

the poem is done, get out
and:
i asked my dad if the corn harvest is over

it is way over, my dad said
Perhaps some other time? I also wanted to put up one of my favourites:
to my nephew on his birthday

i will choke your dad

im not afraid
But something told me that if I got caught putting up a piece of paper that says "I will choke your dad" I would get in trouble so I didn't.
Well, I hope you enjoyed the mind of Steve Roggenbuck and you can check out his website here: LINK!
Edit: Totally got a thank you email from Steve Roggenbuck himself for my guerilla distribution tactics! He also mentioned me on Twitter and a link to this blog so comment or vote in the poll if he sent you here!
Also, for those who enjoyed his poems: click on this link about distribution on his website!
Posted by Bilby P. Dalgyte at 3:18 PM